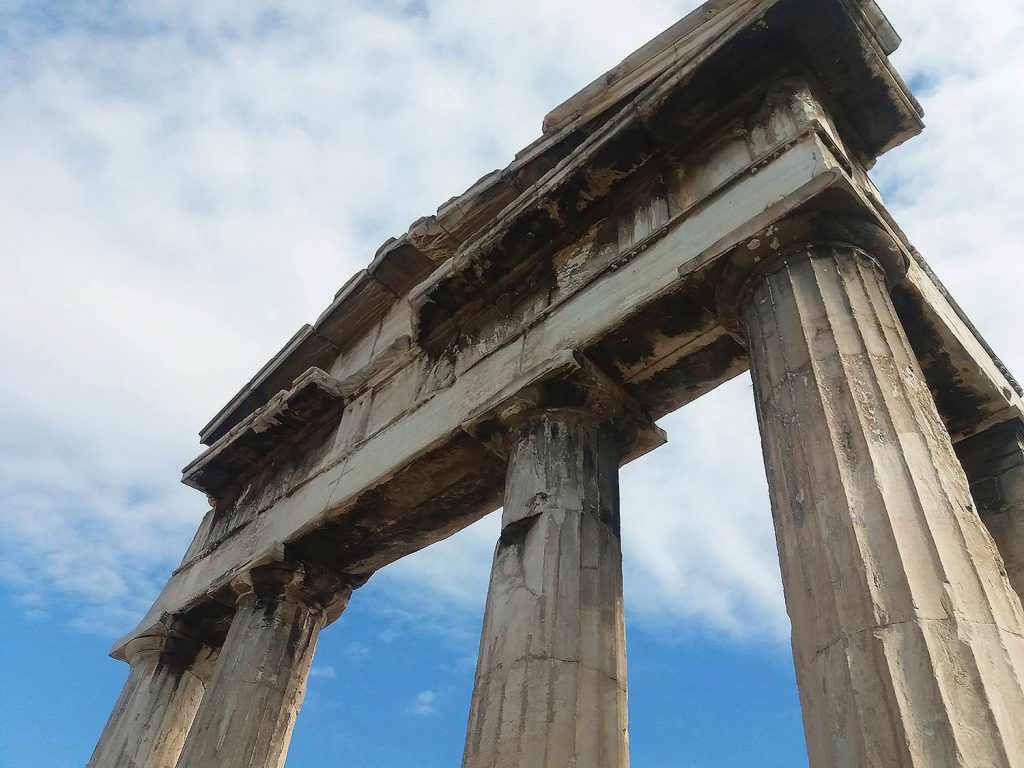 Food Around Athens walks us through Greek history

Food Around Athens walks through Greece

Food Around Athens takes you through one of the oldest cities in the world.  In the Ancient City, the foundation of Western Civilization was set.  Philosophy, medicine, astronomy, democracy, the arts, the gods – all these things were discussed by great thinkers.  While their minds and souls hungered for knowledge, their bodies were nourished by fine flavors – wine, wheat, olives, honey, fruits, fish.  Just as Greek civilization has endured and flourished for tens of thousands of years, so have these traditional favorites.

To eat in Greece is to taste a millennia of rich culture, heritage and tradition…

Bread has always been of significance for Greeks – it is representative of life. Christ said “take eat, for this is my body”,  and it is a phrase not forgotten in a country where more than 98% of the population identifies as Greek Orthodox.  Bread is the food of life – from the dead wheat springs an all-nourishing food.  In times of famine, it was often only bread that was available to feed a family.  And in times of celebration, bread would be dipped in rich golden olive oil. The Koulouri is another form of bread – a ring dipped in sesame seeds. Food Around Athens tours will take you to one of the oldest bakeries in the Greek capital.

Food around Athens and Greece also came from the Greeks of Asia Minor who brought many unique flavors and spices back into Greece.  Dishes like kebab, pastourma (pastrami), bougatsa, halva, giaourtglou, and spices like cumin, paprika and soumak. Don’t miss a pastourma tasting in the oldest family meat shop in Athens during our Food Around Athens tour.

The Ottoman Turks occupied Greece for almost 400 years; it was only natural that these two peoples would influence the other’s cuisine.  The Ottomans were a nomadic tribe – as they pushed their way into the west, they landed in what is now know as modern day Turkey (but was once part of Ancient and Byzantine Greece).  They brought with them spices and foods from their travels through the east. It was about the same time, the 15th century, were rice came into Greece.  Foods like dolmas (rices stuffed grape leaves) found their way on the Greek plate.

While meat, like souvlaki, keftedes and burgers are so popular now, it was not always the case. “Refrigerators” in every home came to Greece in the mid 20th century.  For the most part, a meal of meat was reserved for special occasions.  But cured meats (cold cuts) were things that could be stored more effectively and enjoyed with some cheese and ouzo… and good company!  Souvlaki actually refers more to the cooking process (souvla – a spit for cooking).

Nuts grow abundant throughout the country- almonds, pistachios, walnuts, chestnuts.  You’ll find street vendors selling an array of nuts, or even roasting chestnuts in the winter.  And a trip to Greece would not be complete without trying one of the popular, and delicious, nut desserts – baklava or kataifi.  You’ll also finds nuts incorporated into other favorite desserts – kourambiedes, melomakarona, diples, and loukoumades…

And your trip to Greece will not be complete without tasting Loukoumades!   It is said that in Ancient Greece, winners of the Olympic games would receive the food of goods – delicious little fried balls of dough soaked in “divine” honey.  Today, you can find loukoumades in other ball form or shaped like donuts, either way, they are fried to golden goodness and doused in rich sweet honey…Yes, we will taste them too during our Food Around Athens tours!