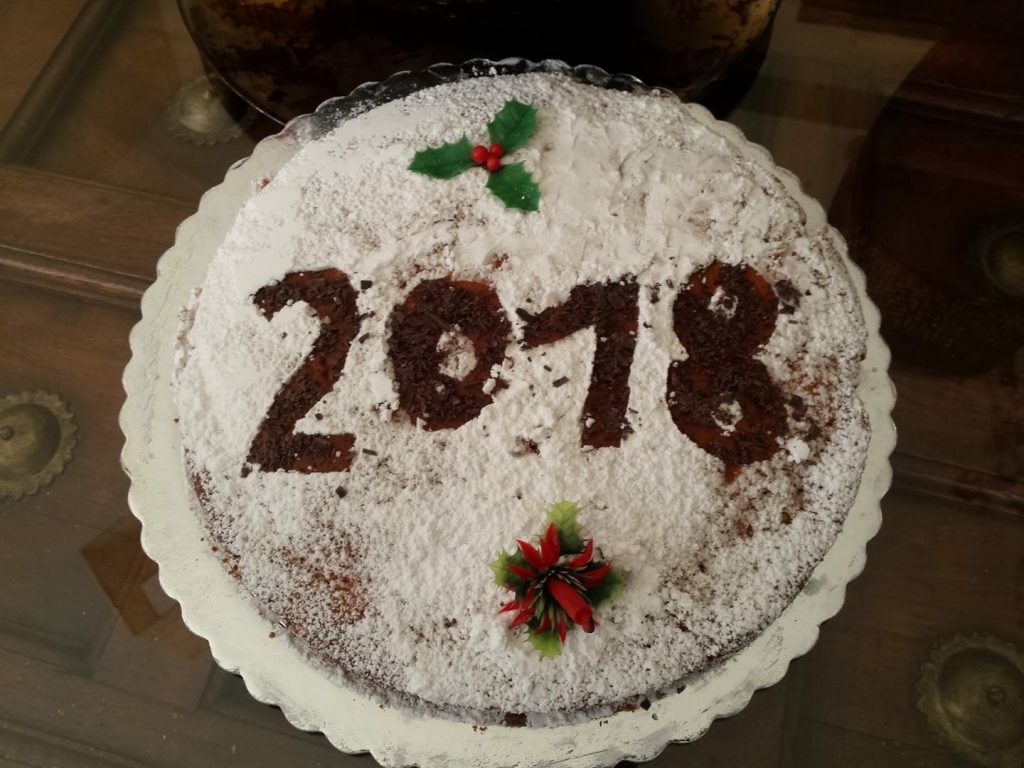 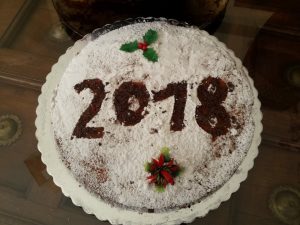 Cake is THE food item that cannot be missed at the end of the year in Greece. The New Year is a wonderful time to reflect on the past and set goals for the year ahead. Traditions, resolutions and emotions are abundant. It’s this time of year that in homes of Greeks, both in the country and abroad, there is sure to be a Vasilopita on the table!

Every January 1, families gather and cut the New Year’s cake Vasilopita and to see who will receive the blessed “flouri”, a special coin that is baked in the bread. While recipes vary throughout Greece (due to ingredients available, but always the finest quality of what might be available), the intent and spirit of the bread is always the same! Translated to “Basil’s Bread”, the cake is made to commemorate the feast of St. Basil (Agios Vasilis) who is legendary for his philanthropy and goodwill. It is, without question, an honor to receive the hidden cake  flouri, and the special blessing that comes with it.

The history of the New Year cake or Vasilopita dates back to the fourth century, CE. St. Basil was born to a wealthy family, raised on estate near the River Iris and was educated by the finest teachers in Caesarea of Cappadocia where he had the good fortune to meet Saint Gregory the Theologian. Eventually, St. Basil would go to Constantinople and then to Athens to complete his studies. Later, he returned to Caesarea and entered an ascetic life.

St. Basil was well known for his piety and philanthropy… and his respect for his Christian brothers and sisters. In a time when taxes were high and people were greatly suffering, St. Basil wanted to help his community, but still allow them their dignity. So he would bake loaves of bread or cake and hide coins in it, and giving these loaves to the poor and nourish them physically, spiritually and economically!

To honor the much beloved saint, Orthodox Christians have had Vasilopita on their tables every January 1 and slice in with much joy and anticipation! The tradition of the cutting of the Vasilopita calls first for the head of the household to make the sign of the cross with a knife across the top of the loaf. Then, the first piece is cut for Christ, the second piece for the Virgin Mary, the third piece is cut for St. Basil. Thereafter, a piece is cut for the home of the host (the one who baked the bread), and for each family member and guest. The last piece is cut to remember the poor and each our responsibility to help those in need.
Greek Orthodox families have held this tradition for hundreds of years. Even in times of famine, occupation and even war, there was a Vasilopita made somewhere (usually a church) were the faithful could take part. The Diaspora has carried the tradition to the North Americas, Australia, Africa and throughout Asia and Europe. Where there is a Greek, or an Orthodox (as the faith has grown far beyond just “Greek” Orthodox), there will most likely be a Vasilopita on the table each January 1. And the tradition is honored not only by families, but communities, businesses and various organizations. What better way to start the New Year than with a special blessing? If you haven’t made your Vasilopita yet, there is still time – just don’t forget to place your flouri in the mix before it goes in the oven!